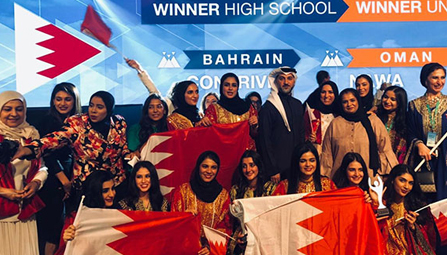 Launched in 2007, The INJAZ Al-Arab Young Entrepreneurs Competition is an annual celebration of the achievements of students who participated and won the National Company Program Competition in their countries after demonstrating sound knowledge in business planning, market research, marketing, sales and feasibility studies. The Competition aims to enhance the entrepreneurial skills of Arab youth, as well as creating job opportunities in the market and to stimulate the economy.

Shedding light on young achievers, the YEC 2018 presents teams from 12 countries, including the kingdom of Bahrain.

“TaaWin”, a company established by students from the Royal University for Women emphasizes on designing solutions to solve the scarcity of space issue, introducing the “RestnGo” book, transformable to a portable chair.

On the other hand, the “CONTRIVE” Company founded by students from Shaikha Hessa Girls School, invented the “Knowledge Hunt” mobile application which aims to enhance teaching, learning and developing of soft skills. The “Knowledge Hunt” is an educational and dynamic board game connected to an application available on App Store & Google Play.

Both teams representing the Kingdom of Bahrain, have competed amongst many regional teams, yet earning the title and winning the YEC 2018 competition.

Ms. Hana Al Sarwani, the Executive Director of INJAZ Bahrain stated “Year by year, the YEC competition gets more and more challenging yet exciting and motivating. Representing the Kingdom of Bahrain at the YEC 2018, fills our hearts with honour and pride. We are proud of Bahrain’s participating teams, we are proud of all the fresh and innovative ideas presented, last but not least, we are grateful to our stakeholders’ continuous support and efforts which brought us here today. Marking a new major milestone with an award earned by our dedicated participating teams aligns with our vision for continuous momentum and growth.”

Abdulrahman Jawahery, GPIC president and INJAZ board member, congratulated Her Highness Shaikha Hessa bint Khalifa Al Khalifa saying “The levels of success achieved by the participants of INJAZ Bahrain fills us with pride and honour. Your highness have played a vital role in leading by example, supporting and motivating INJAZ students throughout this journey, which brings them to where they stand today. The teams have earned their success and have definitely raised the bar for creativity during this important regional event.”

This year’s regional competition is organized in partnership with esteemed global and regional entities, mainly FedEx, MBC Al Amal, Citi Foundation, and Boeing, with the support of local partners from Kuwait including Zain and Kuwait Airways.

Photo Galleries
About Us
Go to Top